Last week, while guesting with local Auburn alum Tex Morris as part of Jimmy Ott’s Game Time Show on ESPN 104.5 FM in Baton Rouge, we had a reminiscing session about the Auburn-LSU rivalry that might be soon to disappear as an annual fixture whenever Texas and Oklahoma join the SEC. Like many in the region, Ott knows the connection such rivalries have with fan bases and laments their possible disruptions, which prompted our nostalgia tour on radio last Thursday morning.

We suppose we have to start wondering, too, about the future of the “Deep South’s Oldest Rivalry” between Auburn and Georgia, which renews again at Jordan-Hare Stadium this Saturday. The Tiger-Bulldog hostilities date to 1892 and have been contested annually since 1944, and was an easy choice for the schools as their annual “crossover opponent” when the SEC first divided into East and West Divisions. The last year the matchup was missed came in 1943, when Auburn didn’t field a team due to World War II. 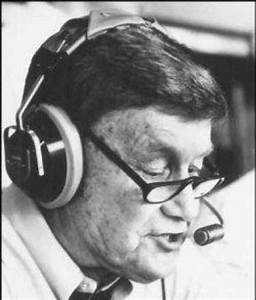 But whenever it’s Tigers-Bulldogs week, their 1982 classic is recalled. Not because it was such a tense battle with national implications, as the Herschel Walker Bulldogs strained to remain unbeaten vs. a dangerous group of Tigers featuring frosh Bo Jackson. Instead, what's always recalled are the last few minutes of the game as described by legendary Georgia broadcaster Larry Munson (worth referencing on YouTube to appreciate what we’re taking about).

Those who might have tuned into my guest-hosting segment on VSIN with Wes Reynolds and Brady Kannan on Auburn-Georgia eve two years ago would have heard my recreation (complete with a passable Munson impersonation) of the following, as with barely 4 minutes to play, and Georgia clinging to a 19-14 lead, the gravel-voiced Munson cleared his throat and delivered perhaps the most-descriptive and animated sequence of calls in sports announcing history as Auburn made one last dramatic attempt to derail the top-ranked Bulldogs.

For as long as Auburn-Georgia is an annual fixture, reliving the following Munson classic will remain a must...

“The Sugar Bowl, the championship, swinging and I mean swinging on a little thread here. Every single play means something now or you’re gone. Total war in Auburn! Complete, total war!!

“4:17. Auburn just content to complete the long drive and use up the clock so Georgia won’t have enough time to save themselves... Third down, big play! Third down, BIG PLAY! Campbell going to pitch to Lionel (James). He got a block! And he got a first down I think on the 14!... A championship hanging with 3:07!... First down by four-and-a-half inches!... Auburn is 14 yards away from upsetting the Dawgs and knocking us out of everything...

“First-and-15 back at the 19. HUNKER DOWN, YOU GUYS!... They are in a 6-4, and they pitch to Bo Jackson...one man knocks him OFF BALANCE and (Tony) Flack came up and GOT HIM! (Dale) Carver spun him three to four yards behind the line, he stumbled off, and little Flack came up and hit him!...

“Auburn up to the line, Edwards to the right, the Little Train to the right...one man split left and man in a slot to the right...Randy Campbell... with a man blitzing...CARVER GOT HIM FROM BEHIND BACK ON THE 30! 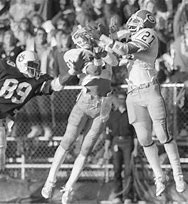 “Fourth and 17...I know I’m asking a lot you guys but HUNKER IT DOWN ONE MORE TIME! Auburn up to the line on the 21, man split left, two men wide right, and a man in the slot to the right...Dawgs are in a 4...and Campbell, as they BLITZ ON HIM...he threw a high, wobbly pass...they fight in the end zone...and the Dawgs BROKE IT UP...THEY BROKE IT UP! Ronnie Harris and Jeff Sanchez got up in the air...and pressured up the middle! They pressured the quarterback, one man in the middle and one from the flank...they pressured him! The Dawgs, with 42 seconds! I won’t ask you...to do that again you guys!”

The result was now secure, but a breathless Munson was still on a roll, and even on the last kneel-down play delivered yet another memorable moment to his audience.

“This defense, they hunkered, they did hunker! McIntyre down here on one knee looking up at the booth...all by himself...everybody else mobbed in the middle. We saved ourselves. WE SAVED OURSELVES! There won’t be many of us in Opelika tonight, but I’ll tell you one thing, we’re gonna’ do something to Opelika!”

As we always like to say during Auburn-Georgia week...thanks, Larry!