by Bruce Marshall, Goldsheet.com Editor
(Editor’s note: The MLB Playoffs begin this week and THE GOLD SHEET will continue its daily MLB releases online, which can purchased for $15 on TGS Top Choice or $25 for up to three picks on TGS MLB Top Choice Plus +, on days with multiples of games)

Following is a quick preview of how the playoffs shape up in both the American and National Leagues. Pennant win prices are included next to each team’s name; our predictions refer to which round of the playoffs we believe each team will reach...except for our projected eventual winner, which will be duly noted.
AMERICAN LEAGUE 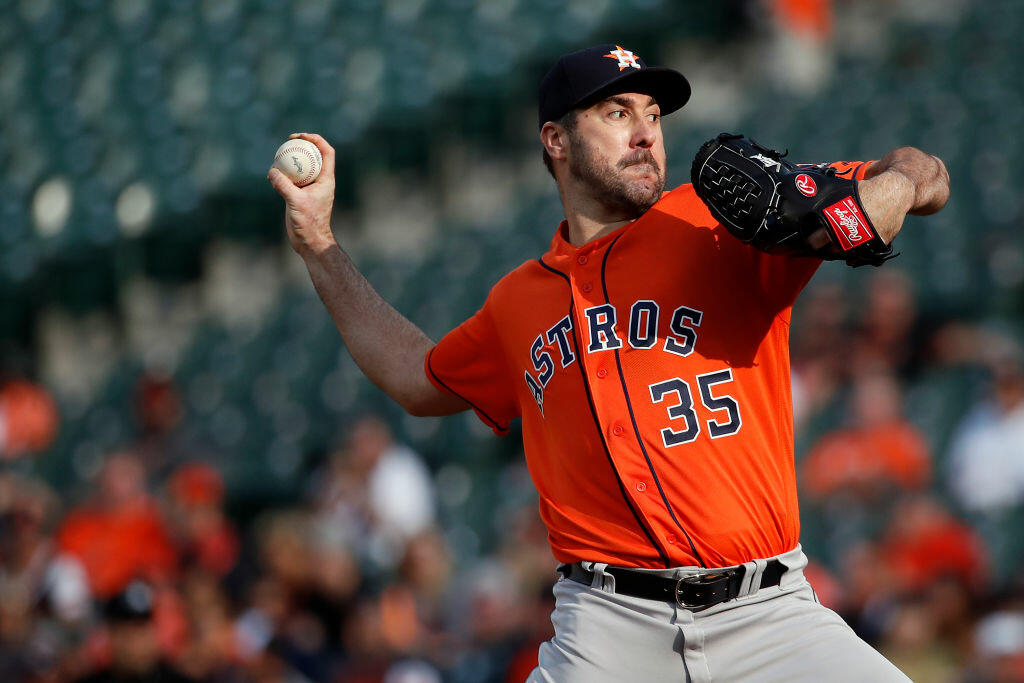 The Houston Astros (5/6) made a strong statement of intent when adding Zack Greinke from the D-backs to an already-loaded rotation at the trade deadline. Along with top AL Cy Young candidates Justin Verlander and Gerrit Cole, manager AJ Hinch has a 1-2-3 rotation that looks awfully imposing. Moreover, with so many free-swinging teams like the Yankees and Twins, and, looking ahead to a possible 2017 World Series rematch, the Dodgers, that quality in the rotation ought to prove a nice elixir to those potential foes that like to swing for the fences. Where Hinch might have an issue is with a possible fourth starter, as Aaron Sanchez (over from the Blue Jays at the deadline) is out and Wade Miley has labored in recent weeks. But the roster is so deep and varied, and the offense is a bit different than that of most of the other contenders in that Houston doesn’t have to rely on the long ball with so many contact hitters in the lineup, while the bullpen is not the question it was at this time last year as Roberto Osuna has been firmly entrenched as the closer all season. One possible concern is SS Carlos Correa, shut down the last week due to back issues, but he’s expected to be ready for the ALDS. Home-field edge throughout the postseason was also clinched with last Saturday’s win over the Angels in Anaheim. Prediction: Winners.

Considering the various injuries and absences that affected the team all season, it was almost remarkable that the New York Yankees (7/4) were able to chase the Astros for the best overall record into the last weekend of the season. Credit manager Aaron Boone for keeping things on course, and now the Bronx Bombers are in relatively good shape entering October. Boone can count upon maybe the hardest-throwing staff in the AL and what is perhaps the best bullpen. Weakness? As mentioned above in the Astros update, it’s all of the free-swingers in the lineup and a homer-centric offense, which is not a bad thing at all except when running into a pitching staff like the Astros. Can Giancarlo Stanton, Aaron Judge and the rest simply long-ball themselves past everyone else? We’re not sure, though the Yankes might catch a break in the ALDS as they get a similar version of themselves in the Twins rather than potential dicey matchups vs. the Rays or A’s. Waiting downstream will likely be the Astros, a matchup we don’t think is in New York’s favor. Prediction: ALCS.

The Minnesota Twins (6/1) played long-ball like no team we’ve ever seen...except this season’s Yankees, who were vying with Minnesota for the all-time homer mark into the final weekend of the campaign. But it’s playoff time now and there will be no Tigers, Royals, or White Sox around to beat up as there often was in the regular season. Moreover, there are other issues that raised in September, starting with the shoulder injury that has shelved CF Byron Buxton, whose stellar defense could be missed, while rookie sensation 3B Luis Arraez injured his ankle in a fluky pop-up situation around the mound on Saturday vs. the Royals and is no sure thing to be ready for the Yanks in the ALDS. And there are further concerns with the pitching staff, as Michael Pineda’s suspension has removed him from the equation, while the likes of Kyle Gibson and Martin Perez wobbled down the stretch. The latter issues are all of great concern to manager Rocco Baldelli, who needs his staff to maintain some order and give his big boppers a chance to outscore the playoff foes. It’s going to be the Yankees in the first round, and the Twins are going to have to do more than simply match New York homer-for-homer, which proved tough in the regular season when New York won 4 of 6 (and scored 30 runs while winning 2 of 3 at Target Field in late July). Prediction: ALDS.

Give credit to the Oakland A’s (12/1) for their latest reincarnation as a contender, the third such occurrence in the Billy Beane era. What is remarkable is how Oakland has been able to re-make itself multiples of times the past two decades without ever having to go in the tank for a full-scale rebuild (as the Astros did a few years back) and doing so on a limited budget. That’s “Moneyball” in a nutshell. Now, the bad news; the A’s have won just one playoff series in the Beane era (2006 ALDS against the Twins), and while they’ve come close a few times, the postseason has mostly proven a hurdle too far. The A’s get the wild card game at home vs. the Rays, so they’ll have a chance to get the playoff monkey off of their back in a one-game showdown, but can they get past the Astros in the ALDS? Oakland did recently win 3 of 4 at Minute Maid Park, and SS Marcus Semien and 3B Matt Chapman are causing WAR calculations to short-circuit. Meanwhile, Liam Hendriks emerged as a lights-out closer. The Yankees, however, would have been a better matchup. Prediction: ALDS.

We’re so tickled to see the Tampa Bay Rays (20/1) make the playoffs, especially as they became the vanguard for the new “openers” strategy in which the bullpen is effectively used for nine innings. But in the playoffs, manager Kevin Cash might be reluctant to rely heavily on key arms like Blake Snell and Tyler Glasnow, who both recently returned to active duty. Though the MVP pitcher has been Charlie Morton, added on the cheap in offseason from Houston and proving a reliable workhorse. Morton starts the Tuesday do-or-die at Oakland. That playoff road is tough starting on the road vs. the A's, but we’re just glad to see a fresh face in the postseason. Prediction: Wild Card. With the National League West once again laying down in front of the Los Angeles Dodgers (1/2) the way the AFC East usually does for the New England Patriots, the Blue could have started to set up its playoff rotation by the All-Star break. A few keen observers are nitpicking, however, wondering about some of the recurring sloppiness that marked many of the losses, but we have some other concerns. Mostly, it’s the same as the Yankees, a lineup full of free swingers, and an offense, though often destructive, reliant almost completely on the long ball. (Worth noting that the Dodgers were out-powered by the Yankees in their midseason series at Chavez Ravine when New York won 2 of 3.) Lefty Clayton Kershaw, while still formidable, has never excelled in the postseason, either (though Walker Buehler has emerged as the number one starter), and Kenley Jansen has not been quite as reliable out of the bullpen as the past couple of seasons. No Padres or Rockies await in the playoffs for Cody Bellinger and friends to pummel, either, and is Dave Roberts a World Series-winning manager? We're not sure. Prediction: NLDS.

The quick re-boot of the Atlanta Braves (4/1) has been something to behold, as only two years ago it appeared as if the Braves were almost starting from scratch in a rebuild that could take a few years. The arrival date has come sooner than expected, however, and this season’s push upward was helped by the emergence of a couple of live young arms, Max Fried and Mike Soroka, with vet Dallas Keuchel a shrewd midseason add. Don’t forget the maturity of everyday players, too, with CF Ronald Acuna, Jr. (recent hip injury not deemed serious) providing a unique power-speed combo at the top of the order, and along with 1B Freddie Freeman giving Brian Snitker a pair of potential MVP candidates. A matchup with the Dodgers in the NLCS might prove tough, but we have a hunch the Braves might get someone a bit more familiar (and palatable) if they can get past the Cards in the NLDS. Prediction: World Series.

For a while it didn’t look like the St. Louis Cardinals (5/1) were going to make a run this season, but the Redbirds took flight around the All-Star break and soared into the playoffs atop the NL Central (despite some angst in the final week courtesy the D-backs and nemesis Cubs). Mike Shildt was able to navigate around subpar season from a lot of key lineup cogs including 1B Paul Goldschmidt, 3B Matt Carpenter, SS Paul deJong, and LF Marcell Ozuna, often forced to manufacture runs (not a bad thing at all). If the bats awaken in October, the Cards have a chance, and their pitchers (especially hot Jack Flaherty) might be able to keep a long-ball team like the Dodgers in the park. But St. Louis stumbled a bit in the last week, taking longer than it should to wrap up the Central, and we don’t necessarily like the NLDS matchup vs. Atlanta, which took 2 of 3 in both series this season. Prediction: NLDS.

Talk about a monkey-on-the-back; that’s the Washington Nationals (10/1) in the playoffs, still without a success in a postseason series (though technically the franchise has one with the old Expos in the 1981 NL East strike-season playoff vs. the Phils). But the Nats are flying a bit more under the radar this season and it’s not as if they simply rolled over in postseasons past. Obviously, there are concerns about a bullpen among the MLB leaders in blown saves (not usually a playoff characteristic). But the rotation is enough to make any team fear; Max Scherzer goes in the NL wild card game (at Nats Park), and a one-game chance to erase all of the past playoff failures. LA would await in the NLDS, and Washington provides a scary matchup, with noted Dodger-menace Patrick Corbin followed by Stephen Strasburg before Scherzer likely pitches in Game 3 at home. FA-to-be 3B Anthony Rendon could also sneak in to win the NL MVP. We don’t know if Davey Martinez is a playoff-winning manager, but we know this is a team that the Dodgers would rather avoid. Prediction: NLCS.

It was another big September for the Milwaukee Brewers (12/1), who left it late before making another breathtaking run (and bringing their Sept. record to 40-14 the past two seasons!). Along the way MVP candidate Christian Yelich went down with a knee injury in mid-September but Milwaukee kept winning thanks in good part to solid pitching and defense (yes, defense still matters!). The Brew Crew, however, cooled off at just the wrong time over the weekend, when the Cubs gifted them a chance to catch the Cards in the Central, but Milwaukee couldn’t take advantage in Colorado, of all places. Thus the difference between winning the Central and going on the road to face Max Scherzer in the wild-card game. We suspect the Bob Ueckers will soon be kicking themselves at this turn of events. Prediction: Wild Card.