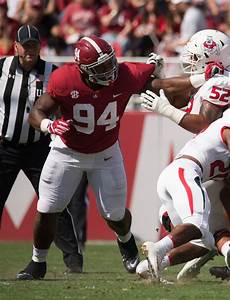 22-BUFFALO BILLS (from Kansas City)...The thought persists that the Bills are a candidate to move up, especially as they already have the 12th pick in this round via Cincy (we projected SMU WR Courtland Sutton to the Bills with that earlier selection last week). And if moving up, Buffalo would likely be doing so to nab one of the featured QBs, with FA ex-Bengal AJ McCarron more of a bridge (to whom, we’re still not sure). If the Bills can’t swing a deal, they could still reach a bit early for one of the next-tier QBs. In the offseason, they’ve already done some reloading on the DL (DE Trent Murphy from the Redskins, DT Star Lotulelei from the Panthers) in hopes of bolstering an anemic pass rush. If the Bills hold onto this pick, another weapon on the edge could also be targeted. Buffalo has this extra selection at 22, courtesy Kansas City, from last year’s draft-day swap that allowed the Chiefs to move up and nab Texas Tech QB Patrick Mahomes. Lamar Jackson, QB, Louisville
23-NEW ENGLAND PATRIOTS (from LA Rams)...Bill Belichick moves up higher than usual in the first round after last week’s deal of WR Brandin Cooks to the Rams, who have been pretty aggressive in the offseason. Belichick threw in a 4th round pick with Cooks to receive this pick and the Rams’ 6th-round selection. Some suspect that Belichick, now armed with a pair of first-rounders, might be looking to move up even further with growing urgency to find a successor to Tom Brady, who has been hinting since the Super Bowl loss vs. Philly that he might not be interested in playing until he’s 45 after all. We’ll see, but the fact that Jimmy Garoppolo is no longer around as insurance and isn’t going to bounce back to Foxborough after signing a big-bucks extension with the 49ers has some believing the Patriots have something up their sleeve.   In the meantime, New England spent some FA dollars on Eagles LT Matt Tobin as Belichick looked for a stop-gap following Nate Solder’s FA move to the Giants, and ex-Falcon DE Adrian Clayborn was added to bolster an underachieving position last year. Belichick’s picks always intrigue, but there’s an extra layer this season with QB perhaps on the front burner. Kolton Miller, OT, UCLA
24-CAROLINA PANTHERS...Still in a period of flux in Charlotte, with owner and franchise founder Jerry Richardson forced to put the team up for sale, and former GM Marty Hurney back in his old job on an interim basis, at least until the ownership situation is resolved.   Fortunately for Panthers fans, a bit more stability on the field with HC Ron Rivera still in the fold and the Pan-thas back into the playoffs last fall, with Cam Newton still appearing to be a potential difference-maker.   Hurney was relatively busy in free agency and was able to minimize the departure of key DT Star Lotulelei to the Bills by adding a slightly-less expensive replacement, Dontari Poe, from the Falcons (at $27 mill over three seasons), though signing ex-Vikings G Jeremiah Sirles does not quite fill the shoes of All-Pro Andrew Norwell, who moved to the Jags. Re-signing vet DE Julius Peppers, who enters his 17th NFL season off a rather productive (11 sacks) 2017, has lessened the need to add another   pass rusher, though Hurney might be looking to add more depth than ex-Giants CB Ross Cockrell in the secondary. Derwin James, S, Florida State
25-TENNESSEE TITANS...We’re not sure what the Titans will be doing in the draft, but we do know that they not only have a new coach (Mike Vrabel, off a stint as the Texans’ d.c.), but a snappy new set of uniforms complete with new blue helmets, too.   The makeover might seem a bit curious after a return to the playoffs for the first time since 2008, but after some deft personnel upgrades (much of it via the draft) by GM Jon Robinson the past couple of years, more was expected from HC Mike Mularkey.   Keeping DE DaQuan Jones in house during early free agency was perhaps Robinson’s best offseason move, along with holding onto G Josh Kline, though if fragile QB Marcus Mariota goes down again in the fall, adding well-traveled backup QB Blaine Gabbert might prove Robinson’s best piece of recent business. Short of Gabbert being forced into the lineup, adding former Super Bowl hero CB Malcolm Butler from the Patriots might prove the Titans’ best offseason addition. Rashaan Evans, ILB, Alabama
26-ATLANTA FALCONS...The “Super Bowl loser” jinx did not land too hard in Atlanta, where even though the season was a bit of a grind, the Falcons made it back to the playoffs after their hard-to-swallow loss to the Patriots in Supe LI.   Atlanta even won a game in the postseason (at the Rams) before narrowly missing a derailment of the Eagles’ Super Bowl train in the Division Round. Though the NFC South is a competitive neighborhood, the Falcs look well-positioned to stay among the NFL’s elite, with the bulk of the roster still appearing to be in its prime.   Granted, Atlanta lost some of its DL in free agency (DT Dontari Poe to division foe Carolina, and DE Adrian Clayborn to New England), but early free agency was not an especially active period for GM Tom Dimitroff, who is instead looking ahead to 2019, when he will have several contract extensions on his mind.   With Poe and Clayborn leaving, Dimitroff made sure to re-ink DE Derrick Shelby, but it would be no surprise if the Falcs, without too many holes on their roster, look at the DL early in the draft. Taven Bryan, DT, Florida