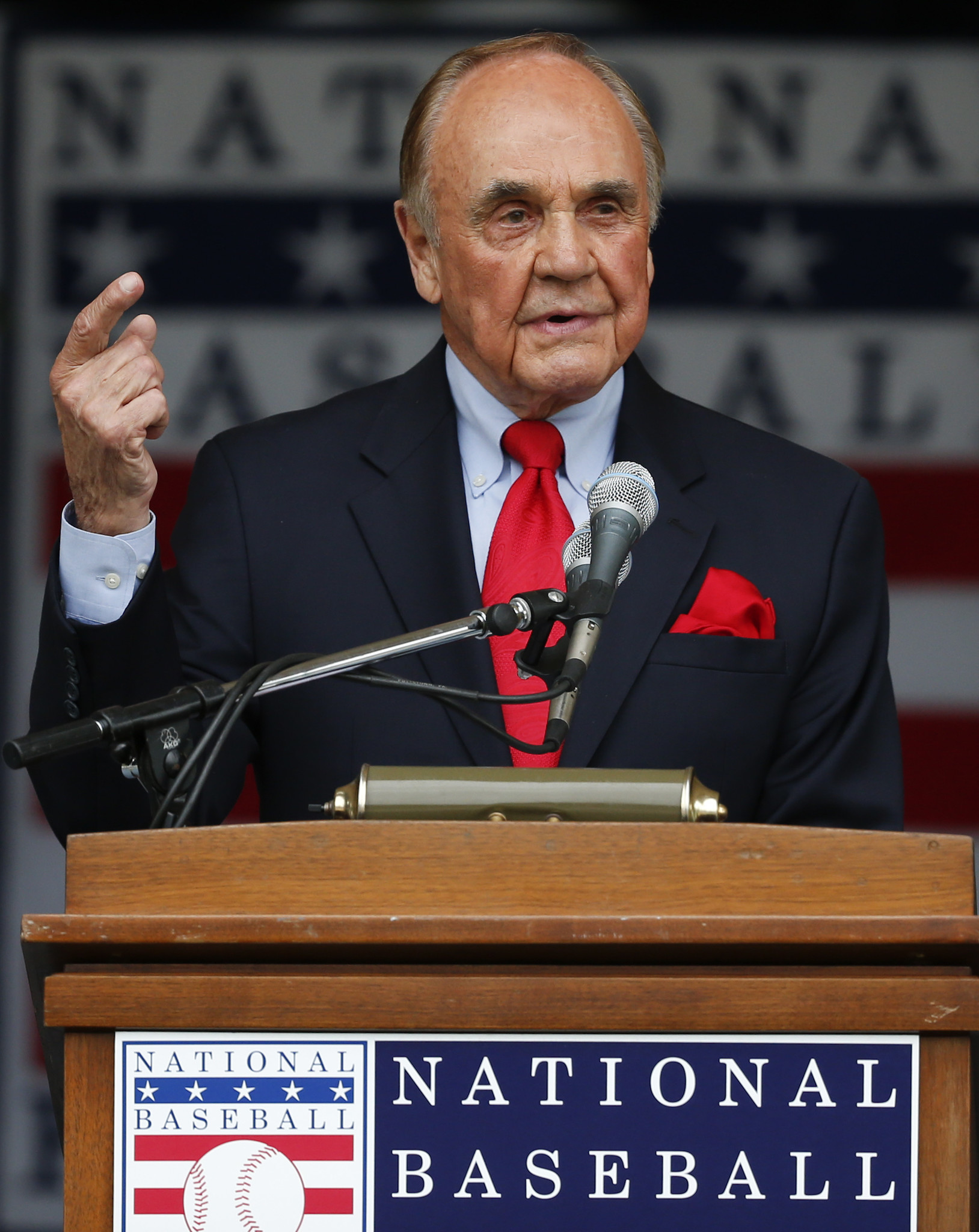 ED NOTE: This week, we were planning to run our first “Bracketology” report of the season, but the passing last Thursday of sports broadcasting legend Dick Enberg has altered our plans. Since we had followed Enberg’s career closely after he burst upon the scene in Los Angeles in the mid ‘60s, and considered his voice to be the soundtrack of our lives, we wanted to run some sort of tribute to this most-versatile of announcers who had been an accompanyist to some of the most-memorable sports moments for more than a half century.
Thus, as our tribute to Enberg, we are re-running the following piece, Shake Down The Thunder–Part II, from these pages of TGS Hoops in January of 2012 when we recalled how Notre Dame managed to bookend the great UCLA basketball 1971-74 win streak of 88 games. Enberg was at the microphone for Eddie Einhorn’s TVS for both of those games at South Bend, the last Bruins loss before the streak began, in January of ‘71 when Austin Carr scored 46 for the Irish, and when Digger Phelps’ Domers, in perhaps the most incredible last 3:18 in college hoops history, would score the last 12 points to end the UCLA streak at 88 games. Enberg’s play-by-play commentary, alongside color man Hot Rod Hundley, from that epic 71-70 Notre Dame win in ‘Jan. ‘74, was one of the most unforgettable sequence of descriptions in college hoops broadcast history and served as the part of the narrative for this Part II piece, which remains one of our all-time favorites from the pages of TGS. And a fitting tribute to this once-in-a-lifetime announcer whose presence not only complemented big games and bigger moments, but enhanced them.
(We also highly recommend Enberg’s 2004 biography, appropriately entitled Enberg’s trademark Oh, My!, for further enlightenment on this sports broadcasting legend.)
Our first “Bracketology” update of the season will now appear in next week’s Issue No. 13 of TGS Hoops.
The Johnny Dee regime at Notre Dame never hit another crescendo as it did against UCLA that late January afternoon in 1971 when Austin Carr scored his 46 points. Everything else seemed anticlimactic thereafter for that Fighting Irish side, even the NCAA Tournament, when Notre Dame was placed in the Midwest Regional. After staving off Southwest Conference champ TCU by a 102-94 count in the first round, Notre Dame advanced to regionals at Wichita, but was upset by Maury John’s Drake Bulldogs, 79-72, at the Sweet 16. Completing the ignominy was a wild 119-106 loss to Guy Lewis’ Houston Cougars in the regional consolation game (yes, they used to have such games).
An era ended that weekend in Wichita for the Irish, as the bulk of that year’s team, including key seniors Carr, Collis Jones, and Sid Catlett, would all graduate. Moreover, Dee had become burned out on the college coaching grind, but fortunately had another career option. A practicing attorney, Dee retired from the sidelines after Carr’s senior season and moved to Denver, where he enjoyed a lucrative career as a member of a law firm that did most of its business by representing the energy industry.
Tabbed to pick up where Dee left off in South Bend was brash, 29-year-old Richard “Digger” Phelps, a former Penn assistant who had moved to Fordham and taken the Rams to the NCAA Tournament in 1971, his only year in charge in the Bronx. That team, led by explosive guard Charlie Yelverton, fashioned a 26-3 mark and made it as far as the Sweet 16, where it lost 85-75 to a Villanova side that would advance all of the way to that year’s Finals behind the great Howard Porter. Phelps’ last game at Fordham was a 100-80 regional consolation win over Frank McGuire’s South Carolina.
Still, the Phelps hiring was considered a bit of a gamble by AD Moose Krause, who had never entrusted one of his flagship sports programs to a coach as young as the chap they called Digger (a nickname affixed to him because his dad happened to be an undertaker). 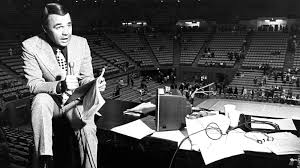 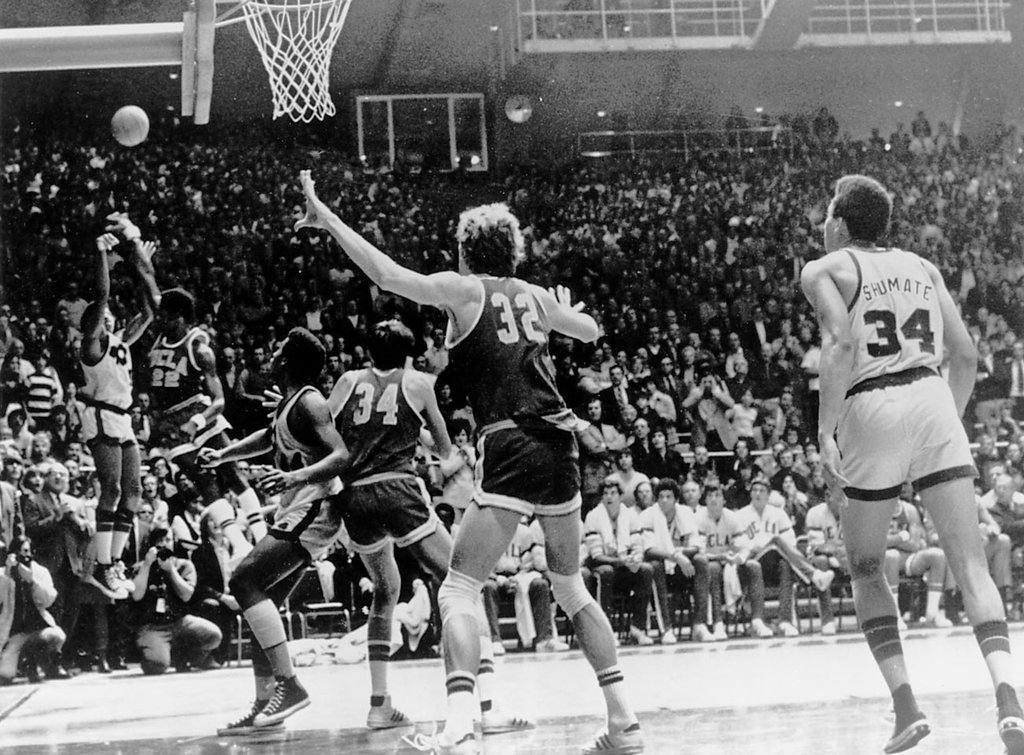 As the camera panned to a nervous Wooden on the bench, Enberg framed the moment with a poignant comment. “John Robert Wooden, 63 years old... when he went into the US Navy in second World War, Digger Phelps was being born....63 and 32 years, the contrast between the veteran Wooden and the electric young coach of the Irish!” Brokaw dribbled from the left wing to near the top of the key, and Enberg counted down the seconds. “34, 33, 32, 31,” said Enberg, as Brokaw looped a pass deep into the right corner baseline, where the “Iceman” himself, Dwight Clay, was waiting in the same spot on the floor where he had broken Marquette’s home win streak the year before. “That’s CLAY...to SCORE!”
Indeed, Clay had buried his jumper from deep in the corner, almost as he was falling out of bounds, and the Irish amazingly had the lead. Enberg was certainly up to the moment as well. “The first time the Irish have led in the game, 71-70...TIMEOUT, UCLA!”
Wooden would come under criticism for waiting until Notre Dame had completed its rally before finally calling a timeout. The explanation the Wizard offered at the time was that he didn’t want to provide a psychological edge to the Irish by calling a timeout and acknowledging their momentum. Wooden did not err often, but most observers believe he overthought this particular situation.
Before UCLA inbounded the ball, Enberg took care of some TVS housekeeping duties by reporting that the Arkansas-Rice game, the second half of the TV doubleheader to be shown in the southwest, had a power outage, and that viewers in the region would instead be switched to the Missouri-Kansas State game (and a Wildcat team featuring a point guard named Lon Kruger). There were still 21 seconds for UCLA to regain the lead after calling the timeout, but the Bruins were a panicked bunch by that time as they sensed their 88-game win streak slipping away. “Notre Dame has 21 seconds to kill,” said Enberg, “and if they do, they will have signed the death warrant for the 88-game win streak of UCLA!”
Curtis dribbled the ball upcourt, hounded by Martin, and forced a pass to Walton near the left elbow of the key, which was deflected and almost intercepted by Shumate. Curtis retrieved the ball about 30 feet from the basket, but quickly forced a shot almost as awkward as the one Derrick Whittenburg would hoist in the last seconds for NC State in the title game vs. Houston nine years later. The long-range jumper missed badly, and after being batted around, landed in the hands of Notre Dame’s Brokaw, who lost the ball out of bounds. Six seconds remained, and UCLA had one more chance, with possession underneath the bucket.

The Bruins inbounded quickly, and Enberg’s description still rings for anyone who watched the drama unfold 38 (now almost 44) years ago.
“Notre Dame 71, UCLA 70...with six seconds left...into Walton, he CAN’T SCORE ...TRGOVICH...MEYERS...SHUUU-MATE...IT’S ALL OVER! THE NUMBER-ONE-RANKED BRUINS OF UCLA HAVE BEEN UPSET BY THE IRISH OF NOTRE DAME, 71-70! THE LONGEST WINNING STREAK IN COLLEGIATE SPORTS HISTORY HAS ENDED WHERE IT BEGAN THREE YEARS AGO!”
The result sent shockwaves through the college basketball world. Marquette’s Al McGuire, of all people, said that the loss “guaranteed” another UCLA title, because there was no way the Bruins would blow another game after losing one in that manner. But the UCLA Walton Gang had a fatal flaw that was exploited again in a similar scenario in the Final Four rematch against NC State at Greensboro. In another thriller, the Bruins had a seven-point lead in the second overtime, yet saw the Wolfpack chop down the lead in quick order, much as did Notre Dame in mid-January of that year, and emerge an 80-77 winner.
As for the Irish? Similar to 1971, the UCLA win would be hard to top. The next week, the teams played a rematch at Pauley Pavilion that the Bruins won handily, 94-75, reclaiming the top spot in the polls, and Notre Dame never really hit that high note again the rest of the season. Like three years earlier, the Irish were bounced at the Sweet 16 in the NCAA Tournament, this time in the Mideast Regional. After routing Fly Williams’ Austin Peay in the first round at Terre Haute, Notre Dame advanced to the regionals at Tuscaloosa, where it was KO’d by Campy Russell and Michigan 77-68.

Still, no one could ever take away what Notre Dame accomplished that January afternoon against UCLA, one of a series of upsets of number one teams that the Fighting Irish would deliver over a four-decade span, right up to last week’s shocker over top-ranked Syracuse (which had been upset by the Irish the week before this piece first ran in TGS in 2012). But 71-70 set the standard by which all others must compared. And as of yet, and for the foreseeable future, we can’t envision any upset coming even remotely close, in either its significance or drama.
Like Sports Illustrated said in its headline story about the game the following week, “After 88 Comes Zero.”    It will be forever hard to top.
And thank you, Professor Enberg, for giving us a call we’ll never forget.