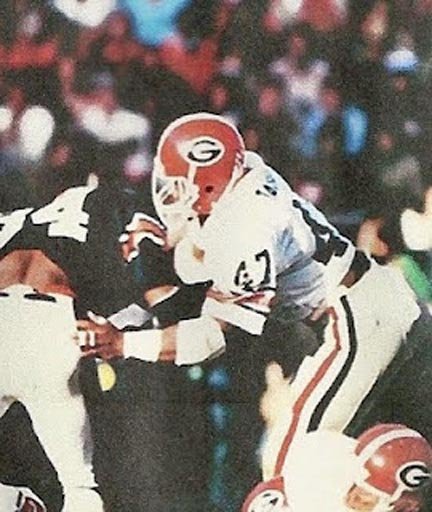 Line ‘em up! We’re moving into mid-November, which means it’s “rivalry time” in college football. We’ve had good fun with the rivalries over the years at TGS, and indeed often recollect upon some of our favorites each summer in our “Retrospective” series. With Georgia and Auburn renewing hostilities this week, we thought it proper to recall on our favorite “Retrospective” pieces from last summer which was presented with a bit of a different twist.
Indeed, part of the spectacle of college football that we love so much lies within its accompanying soundtracks. In SEC Country, those sounds include the legendary voices that describe the action. From John Forney to John Ward, from Jack Cristil to Cawood Ledford, from JC Politz to John Ferguson, from Jim Fyffe to Paul Eells, from Jim Hawthorne to Eli Gold, from Joe Fisher to David Kellum, from Mick Hubert to Charlie McAlexander, from Rod Bramblett to Todd Ellis, generations of SEC fans have had countless storytellers of their own, play-by-play men who became as identifiable with their teams and schools as the coaches and players themselves.
Of all of these legendary   “Voices of the SEC,” however, none might have been as beloved, or as entertaining, as the legendary Larry Munson, who for nearly 60 years described the action in an inimitable manner that had to be heard to be appreciated, or believed. From 1952-65, Munson was Nashville-based and the voice of Vanderbilt before moving to Atlanta for what would be a short stint as a play-by-play man with the MLB Braves after their relocation from Milwaukee. While in Atlanta, Munson also picked up the Georgia gig in 1966, beginning a 42-year run as one of the most famous voices in college football.

Neither Munson’s voice nor play-by-play skills were appreciably better than most of his contemporaries, but it was the manner in which his gravelly tones delivered his descriptions, and the emotional ups-and-downs within, and the varying inflections and tones consistent with hope and despair, often within the same sentence, that made Munson-listening a ritual for Bulldog fans who would cling to his every word.

Munson, however, definitely had his own unique style, augmented by his wonderful story-telling ability and self-deprecating wit. And he was indeed an artist: Munson didn’t just describe games, he narrated them. Which is why he became so revered at Georgia by the Bulldog fan base that would sit enraptured by a Munson broadcast...many of which would become unforgettable.

After all, football announcers don't just endear themselves to an audience overnight. It takes years of shared disappointment, ecstasy and frustration. It's an attachment that builds over time. You have to have a history. And no one had more of it than Munson with the Georgia fan base.
For the gravel-voiced Munson, every football game was an epic story, full of hyperbole, melodrama, foreshadowing and overemphasized despair. Georgia Tech’s biggest lineman was “100 feet tall.” Good punts were “howitzers.” Florida’s quarterback could throw the ball “a million miles,” and Tennessee’s defense would “knock the whatchamacallit out of you.” Georgia’s players were never just tackled, they were “swarmed by a sea of orange shirts.”
Munson was already legendary by 1982, when the Bulldogs, two years removed from a national title, were in the hunt for another as the season wound deep into November. But Munson would ascend to the pantheon of his profession in a crucial battle vs. Auburn that not only kept alive the Dawgs’ title aspirations, but cemented Munson as a Georgia icon forever more. Any list of all-time great Munson calls includes several from one drive alone in that Auburn game, more specifically the final drive as the Tigers, with star freshman RB Bo Jackson, marched downfield in the final minutes in hopes of derailing the Georgia national title hopes. That entire drive serves as a symphony of any “Best of Munson” calls. A bit more background is called for regarding that particular ‘82 Georgia-Auburn classic, which warranted its own chapter in a recent book devoted solely to their historic hostilities, Auburn vs. Georgia, The Deep South’s Oldest Rivalry, by Douglas Stutsman, published this past June. Georgia was unbeaten and atop the polls as it entered Jordan-Hare Stadium that November 13. The Bulldogs were off of back-to-back SEC titles and had won the national crown two years previous in 1980, and to that point had lost just twice in the era of Herschel Walker, on his way to the Heisman in ’82. Auburn, however, had made a recovery in ‘82 under second-year HC Pat Dye, and fueled by the remarkable Jackson, who would win his own Heisman three years later. Dye’s team would enter the Georgia game at 7-2 and with a shot at Auburn’s first SEC crown since 1957 with wins over the Dawgs and Alabama. No matter the Tiger resurgence, UGa would enter Jordan-Hare as 6 ½-point favorites.
The battle at Jordan-Hare brought out the finest in Walker, who would rush for 177 yards and a pair of TDs. Grimly, however, Auburn hung around, and finally landed a mighty blow when down only 13-7 early in the 4th Q. From the Tigers' own 13, RB “Little Train” Lionel James found a slight hole, then shifted, darted, and accelerated as he hit the clear. Eighty-seven yards later, James was in the Bulldog end zone, and after the PAT it was Auburn staked to a 14-13 lead. Jordan-Hare shook to its foundations!
Georgia, however, was used to playing from behind, having rallied to win six times that season, and commenced a grueling 80-yard drive, converting four times in third down situations, the last of those a Walker score from the Auburn 3 almost midway thru the final period. Dawg QB John Lastinger, who only completed four passes on the day, saved one of those completions for a crucial 3rd-and-6 from the Auburn 39 when passing 17 yards to frosh WR Herman Archie for a first down. So, after Walker’s eventual score, and with 8:32 to play, Georgia had clawed back to a 19-14 lead. Meanwhile, Munson, already excited when describing the go-ahead TD, would clear his throat one more time for perhaps the most unforgettable sequence of descriptive calls in college football play-by-play history.   It was Auburn with the ball, mounting a serious drive, and with Jackson threatening a couple of breakaway runs, advancing deep into Georgia territory late in the 4th Q. Munson, however, was just getting warmed up, as he put the final sequence into context, living and dying emotionally with every play.
“The Sugar Bowl, the championship, swinging and I mean swinging on a little thread here. Every single play means something now or you’re gone. Total war in Auburn! Complete, total war!!
“4:17. Auburn just content to complete the long drive and use up the clock so Georgia won’t have enough time to save themselves... Third down, big play! Third down, BIG PLAY! Campbell going to pitch to Lionel (James). He got a block! And he got a first down I think on the 14!... A championship hanging with 3:07!... First down by four-and-a-half inches!... Auburn is 14 yards away from upsetting the Dawgs and knocking us out of everything...
“2:55 to go! Georgia leading 19-14! Needing a play of some kind! A break of some kind!”
Auburn is then called for a motion penalty, costing it five yards. Back to Munson...
“First -and-15 back at the 19. HUNKER DOWN, YOU GUYS!... They are in a 6-4, and they pitch to Bo Jackson...one man knocks him OFF BALANCE and (Tony) Flack came up and GOT HIM! (Dale) Carver spun him three to four yards behind the line, he stumbled off, and little Flack came up and hit him!...
“Ball back on the 21, and it’s second down now and 17...with 2:05 to go. Auburn trying to break our hearts here, 19-14, and the Dawgs lead. Again, you guys, HUNKER DOWN!
“Auburn up to the line, Edwards to the right, the Little Train to the right...one man split left and man in a slot to the right...Randy Campbell... with a man blitzing...CARVER GOT HIM FROM BEHIND BACK ON THE 30!
“Oh, man! Two big plays! 84 seconds!... Third down and 21, back on the 30...Watch this now...I hate to keep saying it, but HUNKER DOWN! If you didn’t hear me guys, hunker DOWN!
“Dawgs in a 5, kind of a 5-4... one wideout to the left...a man in motion, Little Train going to the right... and Randy Campbell, they... blitz him! He dumps it over the middle and it’s COMPLETE TO EDWARDS at the 25 but he STUMBLED DOWN at the 20!...Great one-armed catch off-balance at the 25 but he stumbled down at the 20! Time out Auburn...time out, 49 seconds! 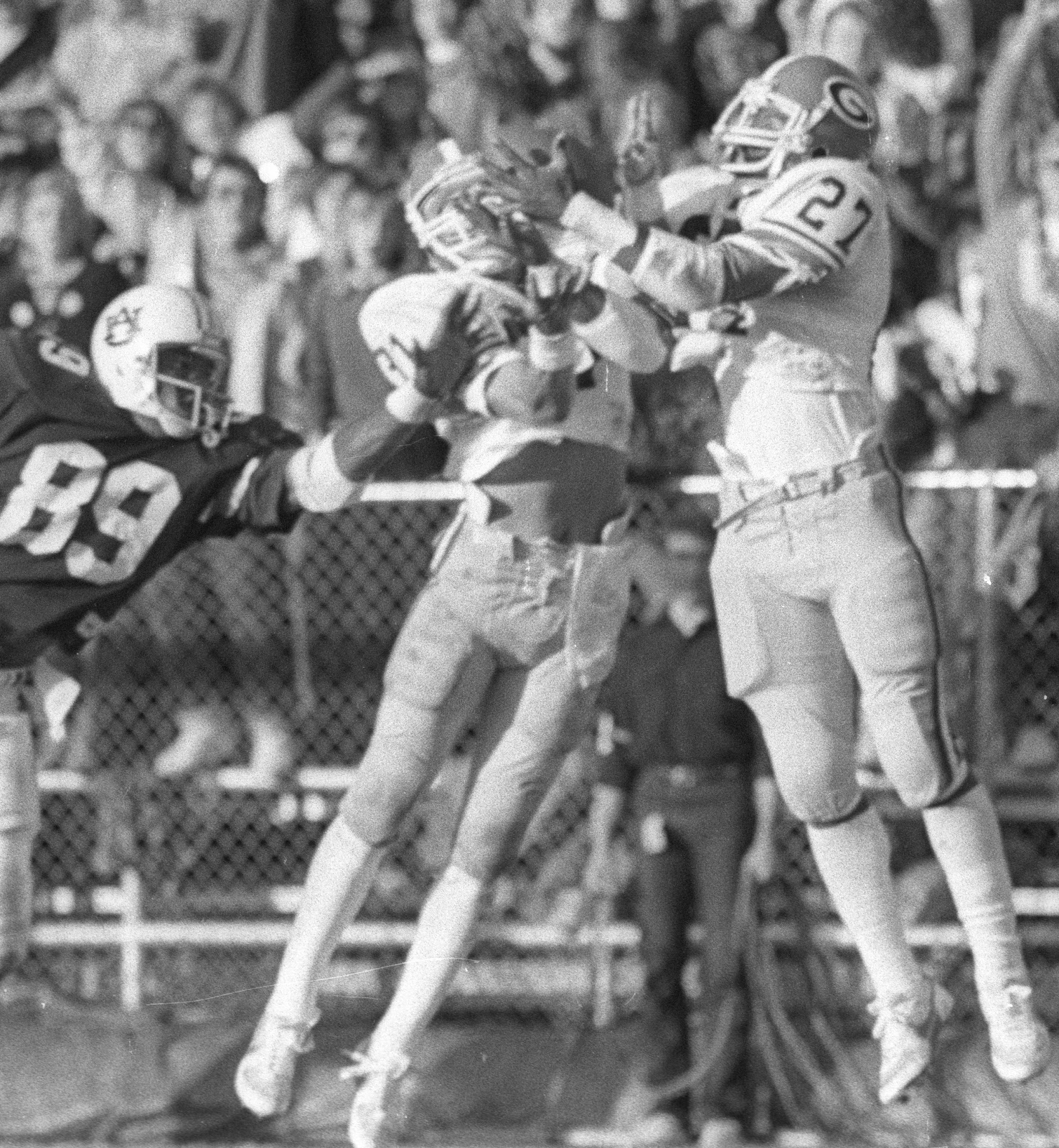 “Fourth and 17...I know I’m asking a lot you guys but HUNKER IT DOWN ONE MORE TIME! Auburn up to the line on the 21, man split left, two men wide right, and a man in the slot to the right...Dawgs are in a 4...and Campbell, as they BLITZ ON HIM...he threw a high, wobbly pass...they fight in the end zone...and the Dawgs BROKE IT UP...THEY BROKE IT UP! Ronnie Harris and Jeff Sanchez got up in the air...and pressured up the middle! They pressured the quarterback, one man in the middle and one from the flank...they pressured him! The Dawgs, with 42 seconds! I won’t ask you...to do that again you guys!”
The result was now secure, but a breathless Munson was still on a roll, and even on the last kneel-down play delivered yet another memorable moment to his audience.
“32 seconds...Lastinger up to the line...Auburn massing 6 with 3...and Lastinger falls back on the 16 to take a 2-yard loss as they curl over the ball...Georgia students and fans standing and roaring...23, 22, 21...clock running...RUNNING...oh, look at the sugar falling out of the sky! LOOK AT THE SUGAR FALLING OUT OF THE SKY! Here comes a Georgia fan RUNNING out across the field in his red pants! And races over toward the Dawg bench...and now everybody ROARING... 3...2...ONE! And they’re carrying Vince Dooley off the field! Dawgs have WON IT! Somebody threw something on us...Dawgs have WON IT! 19 to 14!
“This defense, they hunkered, they did hunker! McIntyre down here on one knee looking up at the booth...all by himself...everybody else mobbed in the middle. We saved ourselves. WE SAVED OURSELVES! There won’t be many of us in Opelika tonight, but I’ll tell you one thing, we’re gonna’ do something to Opelika!”
For Georgia, the win secured another Sugar Bowl, the Dawgs’ third straight, and a showdown vs. Penn State in New Orleans would decide the national title. Alas, the Bulldogs would fall short, 27-23. But the enduring memory of most Georgia fans from ‘82 would be Munson and his storied description of the end of the Auburn game, a broadcasting performance that still resonates 35 years later, and can be relived on YouTube. And why we at TGS love rivalries!
For our opinions on this week’s slate, including Georgia-Auburn and Notre Dame-Miami, please check out our College Analysis.