It’s Notre Dame-Michigan State week, which might not stir the soul of college football as it once did, though for us at TGS and those who still recall their great battle from 1966, there will always be something timeless about Spartans vs. Fighting Irish. In a moment, we not only recall that epic 10-10 draw but at the same time pay one of our planned tributes to iconic Notre Dame HC Ara Parseghian, who passed away in August at the age of 94.
Before we begin to honor Parseghian and reminisce, however, some developments in the nascent college football season have caught our eye and are worth an early-season alert.   Specifically, teams with new coaches who are either making positive, or not so positive, early impacts, noted below.

Positive impacts: Justin Wilcox, Cal...The Bears are 3-0 SU for Wilcox, who has them playing defense in Berkeley for the first time in years, while new o.c. Beau Baldwin, recent HC at Eastern Washington, appears an inspired hire. Jeff Tedford, Fresno State...No one expected the Bulldogs to beat Alabama and Washington, but FSU scratched out spread covers vs. each and is now 3-0 vs. the line for Tedford, who seems to have things much better organized than recent years in the Central Valley. P.J. Fleck. Minnesota...The Gophers are already “rowing the boat” for Fleck, whose team has followed up a sluggish opening win over Buffalo with thumping victories over Oregon State and MTSU. Jeff Brohm, Purdue...Maybe the most dramatic turnaround of all, the Boilermakers suddenly have a menacing look for Brohm, who crafted the nation’s highest-scoring offense at WKU before moving to West Lafayette. 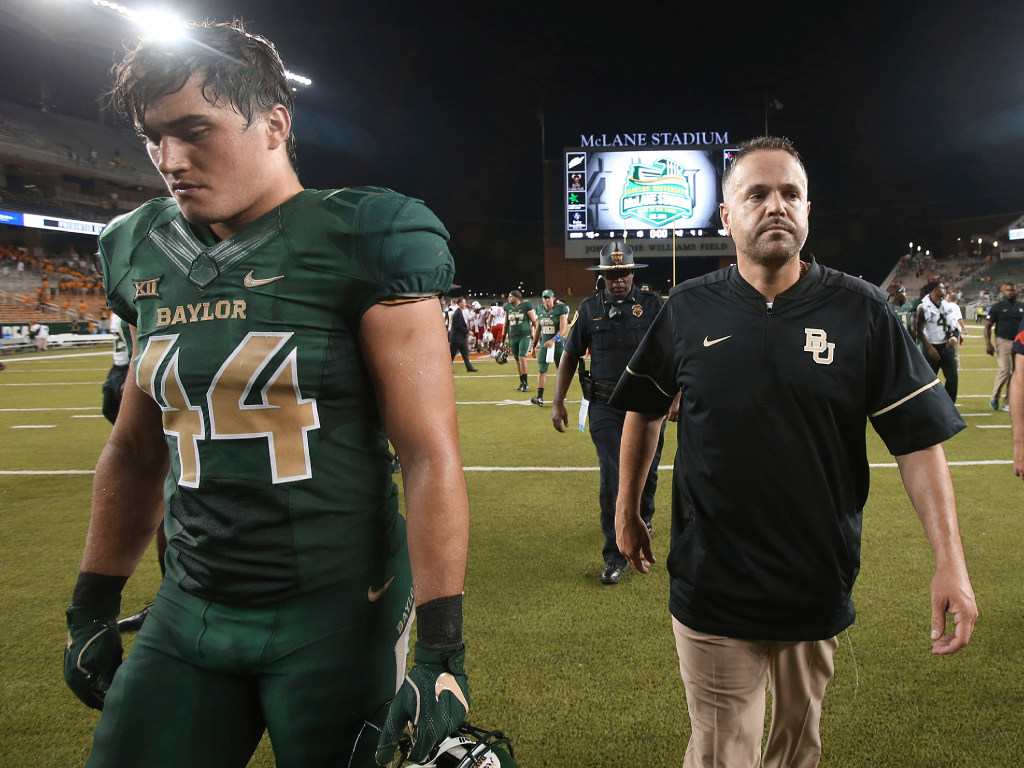 Not-so-positive impacts: Matt Rhule, Baylor...After junking the old Art Briles offense and benching his starting QB (Anu Solomon) after two games, the Bears sit 0-3, with only Kansas appearing in the way of a descent into the Big 12 basement for 2017. Shawn Elliott, Georgia State...The Panthers have already lost to FCS Tennessee State and were blasted 56-0 at Penn State.   Why did GSU dispose of Trent Miles, who got the Panthers to a bowl two years ago? Matt Luke, Ole Miss...In defense of Luke, he was promoted in summer after the abrupt dismissal of Hugh Freeze, and the program in disarray, but his audition for the full-time job does not look promising, with an 0-3 spread mark and some very curious late-game strategy in last week’s loss at Cal. Jay Norvell, Nevada...The Pack’s losses to Northwestern and Toledo were not unexpected; bowing last Saturday vs. Big Sky Idaho State, however, was unexpected. Norvell has puzzled MW onlookers by curiously benching capable returnee QB Ty Gangi in favor of true frosh Kaymen Cureton, whose first start was a loss to the FCS Bengals. Geoff Collins, Temple...Yes the Owls are 2-1 SU, but made hard work of double-digit dogs Villanova and UMass, and have yet to cover a pointspread. Little resemblance to recent Matt Rhule Temple bowl teams. Mike Sanford, Jr., Western Kentucky...The drop from Brohm to Sanford, in his first HC job, has been steep, as the Tops have lost to Illinois and La Tech and have yet to come close to covering a pointspread in three games.
“THE BIGGEST GAME OF THEM ALL”
(We reprise this review, which first appeared four years ago this week in TGS, of the treasured book written by the late Mike Celizic that remains the signature recording of the epic 1966 Notre Dame-Michigan State battle, and also serves as the first of our planned tributes to Irish HC Ara Parseghian, who passed in August).
We believe all serious college football fans should make room in their bookcases for the late Mike Celizic’s The Biggest Game of them All: Notre Dame, Michigan State and the Fall of ‘66. For in the six decades of publishing TGS, we cannot recall of a bigger or more ballyhooed college football game than the battle between the unbeaten and untied Fighting Irish and Spartans (ranked 1-2 since mid-October that year) on November 19, 1966. And Celizic’s description of not only the game, but also the context in which that storied matchup took place, remains must-read material for any serious gridiron follower.
From our point of view, there will almost assuredly never be another regular-season game with the same sort of dynamics and impact as Notre Dame-Michigan State. While it is hardly the only 1 vs. 2 matchup in our publishing history, it will remain forever unique because neither squad was going to be engaged in upcoming bowl action. Of course, in those years, Notre Dame was still encumbered by its no-bowl policy. As for the Spartans, they were staying home for the postseason due to the Big Ten’s draconian “no repeat” rule of the day after MSU had participated in the Rose Bowl the previous campaign of 1965.

Indeed, many believe that those added consequences of the great battle of 1966 helped accelerate changes in both the Fighting Irish bowl policy (finally altered three years later) and the Big Ten’s no-repeat rule, which was eventually repealed in 1972.
While Celizic’s attention to detail in recounting every on-field angle of ND-MSU is riveting stuff, it’s how the author framed the context of that encounter that really sets this book apart from most football-related publishing works. Admittedly, Celizic gained some insights from a unique vantage point as a Notre Dame freshman in the fall of ‘66. But from well-woven tales of the individual journeys of many players at Michigan State and Notre Dame to reminders of a more innocent era that was about to change dramatically within the next couple of years, Celizic hits the sort of “sweet spot” that few sports journalists ever find.
Celizic’s details of the buildup to the big clash are loaded with anecdotal nuggets before he begins to dissect “The Game of the Century” from 1966. Celizic also challenges the media for much of their distortion of events that existed from almost the moment the game ended; few recall some of the developments during the clash that made it more remarkable that Notre Dame could rally from an early 10-0 deficit to forge the evenual 10-10 scoreline. Indeed, the Irish lost starting QB Terry Hanratty (shoulder) and their best offensive lineman, C George Goeddeke (ankle), early in the game to injury, and star HB Nick Eddy didn’t play at all after hurting his shoulder when falling on the train that took the Irish from South Bend to East Lansing. Backups such as QB Coley O’Brien and RB Bob Gladieux thus filled important roles; the pair combined on a 34-yard TD pass in the 2nd quarter to get the Irish back into the game after falling behind 10-0.

Notre Dame HC Ara Parseghian, of course, would immediately come under heavy fire for his late-game strategy of not putting the ball in the air in the final moments and effectively settling for the eventual 10-10 deadlock. Ara rationalized at the time, and with some justification, that the Spartans, who had already intercepted three Irish passes and had blanketed top Notre Dame receiving threat Jim Seymour all afternoon, had stacked their defense with ball-hawkers ready to seize upon another mistake by backup QB O’Brien, and Parseghian feared an error that could cost the game. A bit earlier, the Irish had their best chance to go ahead midway in the 4th Q after S Tom Schoen picked off a Jimmy Raye pass and returned it to the Spartan 18. But MSU LB Phil Hoag nailed Irish HB Dave Haley for an 8-yard loss on 2nd down, forcing an eventual 41-yard FG try by PK Joe Azzaro, who pushed the kick wide right. Neither team would threaten thereafter; this game was mostly a defensive war featuring 6 turnovers and 16 punts, and big offensive plays were few and far between.
We recall that 1966 game well and believe that Parseghian has always been criticized far too harshly after he came under extreme scrutiny from a variety of media sources. Including the LA Times’ iconic Jim Murray and Sports Illustrated’s Dan Jenkins, who would set the agenda for the ages when decrying Parseghian’s tactics (Murray, in character, doing it in sarcastic tones, leaving more blunt criticism to SI’s Jenkins). But we have long believed that Murray and Jenkins unduly influenced the masses by excoriating the Notre Dame coach for his 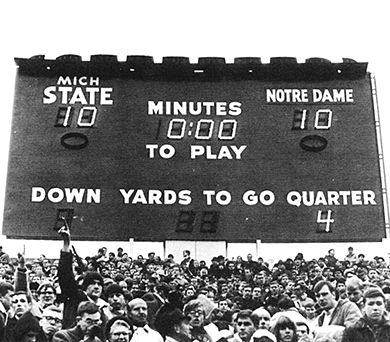 tactics. Which, upon review, were not overtly timid until QB O’Brien’s sneak on the final play of the game. Indeed, Parseghian had gone for it (!) on 4th and 1 from his own 39 yard line with only 21 seconds to play...a gutsy move by any standard, and in stark contrast to MSU counterpart Duffy Daugherty, whose team punted the ball away on 4th and 4 at his own 36 with just over a minute to play, despite realizing his Spartans would likely not see the ball again, and any chance at No. 1 increasingly remote. On the last Irish series (which covered six plays), O’Brien had rolled out twice and appeared intent on passing until scrambling for a short gain on the first play of the drive, then sacked by DE Bubba Smith on the game’s penultimate play. A draw play to RB Rocky Bleier on 2nd down threatened a longer gain until aforementioned MSU LB Hoag made a terrific play to shake free of a block and limit the gain to three yards. Parseghian has long said that if he could have moved the ball as far as his 45-yard-line, he would have been more inclined to instruct O’Brien to look deep for the agile WR Seymour, though it is true that most Irish players were displeased that their coach had decided to sit on the ball in the final seconds.
But if the objective was to finish on top in the polls, Parseghian knew he had a last chance to impress the voters the following week in a high-profile season-ender at Southern Cal, while MSU’s campaign was complete after the 10-10 draw. Ara didn’t miss the opportunity, as the Irish rolled to a 51-0 blowout over the 7-2 and Rose Bowl-bound Trojans. Narrowly ahead of the Spartans in the rankings following the 10-10 tie, Notre Dame secured 40 first-place votes to 10 for MSU in the AP rankings in the aftermath of the USC rout (and 41 first-place votes to 8 in the final tally two weeks later) to finish a clear number one in the polls.   Which has always satisfied us that Parseghian was justified in his actions vs. the Spartans.
Leave it to the brilliant Celizic, however, to best sum up the aftermath of Notre Dame-Michigan State, and attach something more meaningful to the proceedings. “Unlike other matchups of undefeated teams since which created their own splash and then were relegated to the back of the memory because someone did win and someone did lose,” Celizic concluded, “Notre Dame-Michigan State lives forever because there was no resolution.”
Brilliantly said, like so much else in this book.
(The Biggest Game of Them All: Notre Dame, Michigan State and the Fall of ’66 is available on Amazon.com)