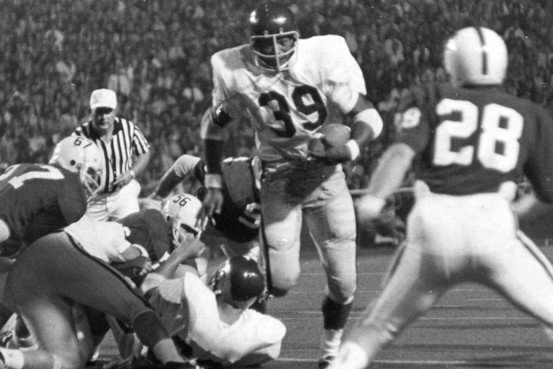 This is a special opening weekend of college football for us at TGS, as we embark upon our 60th season of publishing. As such, we will occasionally be recalling memorable games and events from the past six decades in a year-long celebration of our milestone campaign. Those who have visited our website know that we often enjoy taking a look back, as we do each summer for our college conference Retrospective series.

Opening weeks are probably worthy of their own Retrospective pieces, and the memories flow for us as we look back over the years. We recalled opening weekend 1967 in our summer Pac-12 Retrospective piece, when there would be a pair of games at the LA Coliseum in the days USC and UCLA shared the big oval, with the Trojans winning O.J. Simpson’s debut over Washington State on Friday night before the Bruins, with QB Gary Beban launching his successful Heisman campaign the following night, rallied late for a stirring 20-16 win over Tennessee in the intersectional of the year. We also often recall a Monday night game from opening weekend of the glorious 1975 season, when a 20-point underdog Missouri would stun second-ranked Alabama in Birmingham, 20-7, in front of ABC’s cameras in what was a coming-out party for Tiger RB Tony Galbreath. The following Bicentennial year of 1976, five of the top eight ranked teams would fail to win in opening week, with brand names Alabama (this time vs. Ole Miss), Southern Cal (vs. that pesky Missouri) and Texas (vs. Boston College, signaling that the end was near for the era of HC Darrell Royal) among those suffering stinging defeats, and top-ranked Nebraska held to a 6-6 draw at LSU. The same day, Pitt served notice that it was for real, beginning its national title campaign, and RB Tony Dorsett his Heisman season, with a 31-10 romp at Notre Dame.

No opening weekend, however, quite matched 1970, the year in which the NCAA in January granted schools the opportunity to add an extra “11th game” to the schedule, beginning with the upcoming season. Among those taking advantage of the 11th game were traditional powers Southern Cal and Alabama, with coaches and friends John McKay and Bear Bryant agreeing to a home-and-home series that would commence with a game that September 12 at Birmingham, and conclude the following season at the LA Coliseum.


As the years have passed, that 1970 SC-Bama game has grown in mythology far beyond the normal bounds of sporting events. It took almost 30 years, however, before the national media began to give that landmark game the attention it deserved. Unfortunately, with so much time having passed between the actual event and the eventual analysis of proceedings and related developments from that night at Legion Field, the narrative of SC-Bama 1970 has become a bit distorted. With the Trojans and Crimson Tide set to meet again this Saturday at Arlington, we are preparing for a new wave of SC-Bama 1970 recollections and errant mythology...something we at TGS, having been already publishing for over a decade at the time of that game from 46 years ago, are in a unique position to clarify.

Of course, it has never been lost upon us the significance of that game in 1970, when the Trojans would be the first fully-integrated team to face the Crimson Tide in Alabama. It was not, however, the first integrated team ever to face Bama, which had been facing integrated teams in bowl games for much of the previous decade. In the 1968 and ‘69 seasons, the Tide had been whipped by a pair of integrated Big 8 teams (Missouri in the 1968 Gator and Colorado in the 1969 Liberty) after twice slamming another integrated Big 8 side, Nebraska, in bowl games after the 1965 & ‘66 seasons. A handful of black players had also already faced the Tide in Birmingham or Tuscaloosa, including Miami-Fla. and its first black player, WR Ray Bellamy, in 1969, and a couple of Tennessee players the same year (more on them in a moment).

For all of its landmark implications, however, SC-Bama 1970 did not receive an inordinate amount of national coverage, which has the modern-day historians a bit stupefied. There was a bit more attention paid to the nationally-televised ABC game and another “11th game” that week between Jim Plunkett’s Stanford and fourth-ranked Arkansas, which also qualified as a socially-significant game, as the Razorbacks had just broken their own color barrier that season with RB Jon Richardson. Stanford-Arkansas was also an instant classic, as that pulsating 34-28 win for the then-called Indians would be the talk of the nation the following week.

It is also hard for modern-day biographers who were not alive in 1970 to relate to that year, when the Vietnam war, and not racial tensions, dominated the headlines. Though the ‘60s were a particularly turbulent period, by 1970 the nation was temporarily beyond the various major race riots in preceding years, with both the Civil Rights Act and Voting Rights Act becoming law in the middle of the preceding decade. Much had changed for the better on the civil rights front from the early ‘60s. Yet Vietnam was the major news story in ‘70, along with the related Kent State massacre in May.

Football-wise, the Tide was in a relative downturn at that stage, barely able to become bowl eligible the previous 1969 season and finishing 6-5 after the Liberty loss to Colorado. The SC-Bama 1970 game was not much of a contest, either, with McKay’s Trojans, off a 10-0-1 Rose Bowl-winning season the year before, and ranked third entering the ‘70 season, throttling the Tide, 42-21, as soph FB Sam Cunningham made quite an SC debut, gaining 135 YR and scoring a pair of TDs. Bama would trudge forward to an unremarkable 6-5-1 season, while the Trojans would eventually disappoint and finish only 6-4-1. That neither team was particularly remarkable in 1970 probably had something to do with the landmark game losing much of its immediate luster until subsequent generations would pick up the baton and recall its significance.

(It would also surprise modern observers that while SC’s 1970 team included 18 blacks, only five of them started in the game, though Cunningham, QB Jimmy Jones, and RB Clarence Davis were featured performers. Defensive ends Charlie Weaver and Tody Smith were the Trojans’ only other black starters that night.)

Of course, one of the much-peddled narratives about SC-Bama 1970 was that Bear Bryant brought in SC RB Cunningham to his locker room after the game and announced to his players, “Gentlemen, this is a football player.” Except that no one ever confirmed that tall-tale, even Cunningham, and it has been refuted by others, including Bama QB Scott Hunter. Another whopper about SC-Bama 1970 was that the Bear actually desired McKay’s integrated team to deliver a beating to the Tide that would prove to the Bama fan base that it was time to move on from the days of segregation and begin integration. That angle, however, has long been roundly dismissed by many Bama historians, including Keith Dunnavant, a Bryant biographer and author of The Missing Ring, a chapter of which was a focus of this summer’s SEC Retrospective on our TGS website.

“This whole notion of Bryant losing to SC to make a statement? I’m sorry, there is no way he would want to go into a game believing he was going to lose,” said Dunnavant in an LA Daily News story in 2013. “Did he know USC coming to Birmingham might have some transcendent effect? Did it have powerful symbolic overtones. Absolutely. But the story is just so much more complicated.”

We have long acknowledged SC-Bama 1970 as a significant marker on a variety of fronts, both in society and sport. But having written in the past about several other developments in the eventual breaking of the color line in college sport, we know that SC-Bama is an important, but certainly not the only, chapter in the story. (Check out our TGS website archives for past features about SMU’s Jerry LeVias, the first black scholarship football player in the old Southwest Conference, and various hoop recollections from the early ‘60s, including detailed pieces about Cincinnati and the old Missouri Valley, Loyola-Chicago’s 1963 title team, and Mississippi State from the same 1963 and the most unforgettable story of the era regarding its brave entry, in the face of heavy state-wide political pressure, into the NCAA Tournament. Which is a story of significantly more intrigue than SC-Bama 1970).

The fact is that before SC trekked to Legion Field in 1970, Bama had already broken its color line when Bryant signed RB Wilbur Jackson, who was a freshman (who were then ineligible for varsity play) in 1970. As AD, Bryant had already helped break the Bama color line on the hoops side by allowing HC C.M. Newton to sign future star Wendell Hudson in 1969. The winds of change were also blowing elsewhere in the SEC, where Kentucky’s Nat Worthington broke the football color line in 1967 after Vanderbilt’s Perry Wallace had done so in hoops the previous year. And before SC and Bama agreed to meet, Bryant had already scheduled a home-and-home with a very integrated Houston, which had crushed Auburn in the preceding ‘69 Astro-Bluebonnet Bowl and would host the Tide in 1970 at the Astrodome before a return match at Tuscaloosa in ‘71.

Bryant’s Bama varsity would finally integrate in 1971 with Jackson and juco DE/LB John Mitchell (eventually a longtime NFL assistant coach, and currently with the Pittsburgh Steelers), who actually became the first black player to step on the field for the Tide in the 1971 opener at SC. Which, by the way, would be a Bryant masterpiece, as he unleashed a new Wishbone offense on an unsuspecting McKay, who had not prepared for it. Bama jumped to a 17-0 lead and would win 17-10 en route to an unbeaten regular season with one of the last almost completely-white Tide teams, which themselves would be fully integrated within a few years.

We have long believed that the overlooked game of the era, and perhaps a more-important marker regarding the color line at Alabama, and the SEC, came in the 1969 season, when a strong Tennessee side would pummel the Tide, 41-14, in Birmingham. The Volunteer program had already broken the color barrier with HB Lester McClain in 1968, and LB Jackie Walker, who would eventually become the first black captain of an SEC team, the following year. Longtime Bama fans will say that Walker’s dancing 27-yard TD return of an errant pitch by Tide QB Neb Hayden in that ‘69 game stung more than anything USC did the following year, and began to get Bama fans to realize that change was inevitable.

As for that change, the truth is that it was already afoot at Bama and the SEC before Trojans-Crimson Tide in 1970. The color barriers had been broken, and while SC-Bama might have accelerated the process, the game was not the sole cause of integration in the SEC. It was already happening. But it’s a nice story!