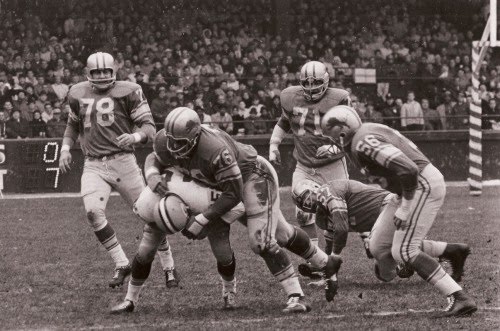 Though the Lions and Packers battled for the NFC North crown at the end of last season, most of their matchups in recent years have have not been very memorable. And, frankly, there's nothing to believe we are in store for anything special when they square off again this Sunday at Lambeau Field, where Detroit has rather remarkably not won since George Bush was still in the White House...that's George H.W. Bush in 1991!

But Lions-Packers still stirs the memories, especially for those around in 1962, as we were at TGS in already our sixth season of publishing. And whenever any teams (such as the Patriots, Bengals, and Panthers this season) remain unbeaten into mid-November, the Green Bay version of '62, which might have been the immortal Vince Lombardi's greatest, is often recalled. The Packers won their first ten of that campaign, but in perhaps the most famous of all Detroit-Green Bay battles, the Pack would suffer its first loss on Thanksgiving when throttled by the Lions, 26-14. Many gridiron aficionados know the Lions roughed up Green Bay QB Bart Starr, sacked 11 times that day by a ferocious pass rush led by Alex Karras and Roger Brown. The Pack would not lose a game thereafter, finishing the season at 13-1 before beating the Giants for the second straight year in the NFL title game.

What the modern-day historian might not realize, however, is that the Thanksgiving game in '62  was not really the pivotal game of that season. In fact, it was the first meeting between the Packers and Lions at then-called City Stadium on October 7 that would set the tone for the remainder of the campaign. That death struggle was meaningful enough to warrant modern-day chronicling in a couple of different forums, including Doug Warren's Lions Report, plus a special "Old School Packers" link on the Milwaukee Journal-Sentinel's website that features Chuck Johnson's game story, as well as many throwback black-and-white game photos to provide more texture to the review.

Detroit, which won its last NFL title in our first TGS publishing year of 1957, was a serious contender again in the early '60s after age, injuries, and the trade of QB Bobby Layne had mostly disassembled the title team of the late '50s. Coach George Wilson remained from '57, however, and the Lions were able to reboot in 1960 and '61, chasing Lombardi's emerging Packers before finishing second in both years behind Green Bay in the Western Conference. But after the trade of Layne to Pittsburgh in '58, neither Tobin Rote, nor Earl Morrall, nor Jim Ninowski provided the leadership at QB that Wilson believed the Lions needed to overcome the Packers. To that end, Wilson engineered a blockbuster trade with the Browns after the '61 season, bringing in QB Milt Plum from Cleveland. Plum (right) had led the NFL in passer-rating the previous two years, and Wilson believed his new QB could lift the team, already boasting of a title-caliber defense, above Green Bay in the West.

Detroit, full of confidence with new QB Plum and believing it had the Packers' number after beating Lombardi each of the previous two seasons, raced out of the gate in '62. As did Green Bay; after three weeks, both were unbeaten and had destroyed all opposition, with the Lions outscoring foes 119-51, while the Pack had piled up a 100-7 margin over its first three victims! The NFL thus stood still for their Week Four showdown at Green Bay where Lombardi's powerhouse team would be installed as 13 1/2-point favorites. Which only further fueled Detroit's resolve as it prepared for a kamikaze effort that Wilson's players believed would mark the Lions, and not the Packers, as the real big boys on the NFL block.

Conditions in Green Bay were dreary, with a game-long rain and drizzle and a slow, muddy track. Nonetheless, Bart Starr and the Packers made an encouraging start with an 80-yard drive on their opening possession that would result in a short Paul Hornung field goal, but the game would soon descend into a defensive war for the ages. Detroit would force a Jim Taylor fumble in Green Bay territory late in the first quarter, though Packer DB Herb Adderley would subsequently block a 25-yard FG try by Lions LB/PK Wayne Walker. Green Bay, however, would give the ball back on its next possession after Karras recovered a Starr fumble following a big hit by future HOF LB Joe Schmidt. Set up at the Packer 34, Plum led an amphibious assault thru the mud to the Green Bay goal line, with ex-Wisconsin RB Dan Lewis swimming the last six yards to give Detroit a 7-3 lead it would hold until halftime.

The heavy conditions and the Lions' aroused "D" suggested the lead could perhaps hold the remainder of the game. After intermission, Detroit continued to frustrate Lombardi's offense, intercepting an option pass by Hornung deep in Lion territory before repelling another Pack drive that had to settle for a short Hornung field goal at the end of the 3rd Q to cut the lead to 7-6.

Grimly, the Lions held on, with both teams failing on long FG attempts in the 4th Q. After Hornung's badly missed 47-yard FG try was returned to the Lions' 22 by WR/KR Pat Studstill, just over 6 minutes remained, from where Plum fired up the Detroit offense for one last drive designed to run out the clock. Twice, Plum was able to connect with tight end Jim Gibbons on clutch third-down throws to keep the drive alive. After a short run by FB Nick Pietrosante just inside of the 2-minute warning, Plum was faced with a third-and-eight from his 49. The Packers were down to their last timeout. Without a stop, Green Bay might not get back the ball, and even if it held, it would likely use its final timeout before a punt and be faced with a long, muddy field to navigate without timeouts to get into position for a last FG try, hardly a sure thing in the brutal conditions. Packer prospects appeared bleak.

On third down from the 49, Plum would go for the throat and a first down that would effectively end the game. Plum called the same "8 and 5, slant in, slant out" that had worked to free Gibbons for key first downs earlier in the drive. By design, wideouts Gail Cogdill and Terry Barr would essentially run the same timing route patterns on the opposite sides of the formation. On this decisive third down, however, Barr slipped on his cut just as Plum threw, with the ball going straight into the hands of alert CB Adderley, who would return the interception 42 yards to the Lion 18. Carefully, the Packers maneuvered four more yards and into position for Hornung to kick a 21-yard FG with 33 seconds remaining to reclaim the lead. With time for only a few plays, Plum could advance the Lions no further than their 45. Green Bay had escaped with a 9-7 win!

There have long been various reports as to what transpired in the Detroit locker room after the game. Many of the players, mostly the defenders, were irate at Adderley's interception and blamed Plum for the error. According to Doug Warren's Lions Report, "Plum had to be rescued in the post-game locker room by George Wilson as he was on the verge of being physically assaulted by some members of the Lion defense. Four years after the incident, in a 1967 conversation with Detroit News writer Jerry Green, Alex Karras admitted to being one of those who attacked Plum. Legend persists that Joe Schmidt also attacked Plum after the loss. To this day, however, Joe insists that he did not."

By the time Detroit got its Thanksgiving revenge, it had also lost a close 17-14 decision to the eventual East champ Giants and still needed help from some other team to beat Green Bay and force a one-game playoff. But it was not to be, and in the days before the "wild card" teams would exist, the '62 Lions, believed by their players and many others to be the best team in the league, instead would have to settle for being one of the NFL's best ever runners-up. And for Detroit fans who remember 53 years ago, the sting still hasn't gone away. (For our opinion on this week's Lions-Packers, and other upcoming action, check out our NFL Analysis section.)