(Editor's note: The MLB playoffs begin this week, and THE GOLD SHEET continues its daily releases online, which can purchased for $10 on TGS Top Choice, or $25 for multiple picks on TGS MLB Top Choice Plus (+) at www.goldsheet.com.)

Following is a quick preview of how the postseason shapes up in both the American and National Leagues. Pennant win prices are included next to each team's name.

After a bit of a bumpy September in which they lost 16 of 25 at one point, the Kansas City Royals (2/1) stabilized in the final week of the regular season to wrest home-field edge in the playoffs. There were some concerns early in the month when the bullpen briefly faltered and manager Ned Yost demoted closer Greg Holland, who would eventually be diagnosed with a torn ligament in his elbow. Set-up man deluxe Wade Davis might be an upgrade as the closer, though K.C.'s bullpen bridge to the ninth inning, an integral component in last October's charge to the World Series, has been altered, with Luke Hochevar and/or Ryan Madson now preceding Kelvin Herrera before Davis gets the ball. While the relief corps appears to remain solid, there are some questions in the rotation, especially trade-deadline addition Johnny Cueto, who was a major disappointment (KC has lost 7 of his last 9 starts). But last year's playoff experience should prove invaluable to sorts such as Lorenzo Cain, Eric Gordon, and Mike Moustakas, while the offense might have a sharper edge than a year ago with DH upgrade Kendrys Morales and deadline addition Ben Zobrist. With home-field edge and the AL's best bullpen, KC has some definite advantages in October. 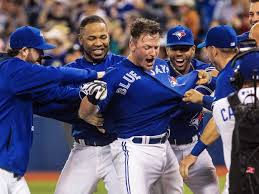 Many are nonetheless suggesting the Toronto Blue Jays (3/2) as the team to beat, and certainly the Jays have been the AL's best since the All-Star break, having tapped a rich vein of form that was augmented by several aggressive trade-deadline acquisitions that added a staff ace (David Price) and an MVP-caliber SS (Troy Tulowitzki), plus veteran reliever Latroy Hawkins, whose presence seemed to settle what was an unreliable bullpen that eventually uncovered a new closer in young Roberto Osuna. Make no mistake, however, Toronto is going to try to slug its way to the World Series for the first time since 1993 with MLB's top-scoring offense that also roughed up the KC staff when taking 3 of 4 from the Royals at Rogers Centre in late July. If facing the Royals, the Toronto bats might be able to compensate for KC's bullpen edge, though the Jays might rue blowing home edge in the final week, as they have been very tough to beat at Rogers Centre.

Of the rest in the AL, we would be most wary of the precocious yet streaky Houston Astros (15/2), whose penchant for blowing hot-and-cold almost cost them a wild card berth. The 'stros did manage to overcome a final week on the road after recording one of the AL's worst visitor marks the previous four months. Possible Cy Young winner Dallas Keuchel was almost unbeatable at Minute Maid Park this season, and fellow starters Lance McCullers and Collin McHugh form the nucleus of the AL's most promising young rotation. But can such a free-swinging lineup cope with playoff-caliber pitching? The New York Yankees (15/2) also have to go the wild card route and did not exactly finish with a flourish after surrendering the East to the Blue Jays. We wonder about pitching depth, especially with CC Sabathia now in alcohol rehab after a mostly-ineffective season, and much faith being placed in rookie fireballer Luis Severino (2.77 ERA in ten starts), who appears to be the staff ace entering the postseason. The absence of injured 1B Mark Teixeira (shin) has taken the biggest bat out of Joe Girardi''s lineup. The Texas Rangers (6/1) appear the least-likely AL World Series threat, unless trade-deadline addition Cole Hamels can pull a Madison Bumgarner-like act from a year ago. We don't think the Rangers have enough pitching, and the bullpen remains a potential issue.

By now, the Pittsburgh Pirates (5/1) might be tiring of the wild card game, participating in the one-game knockout three years running. This fall's route to the NLCS will also have to go through the NL Central (Cubs and Cards), which might be bad news for the Bucs, who were under .500 within the division, with losing records even vs. the lowly Brewers and Reds (huh?). Still, Pittsburgh is now playoff-seasoned, has difference-makers such as recent MVP Andrew McCutchen and Starling Marte in the field and at the plate, and the rotation was bolstered by key deadline addition JA Happ, added as insurance in case AJ Burnett was slow to return from the DL. Gerrit Cole starts the wild card game at PNC Park vs. the pesky Chicago Cubs (6/1), who arrived much earlier as a contender than even their most-loyal diehards were expecting, thanks largely to new manager Joe Maddon, who pushed the right buttons all season. Though we are not sure about the rotation beyond likely NL Cy Young winner Jake Arrieta (who starts the wild card game vs. Cole), the Cubs have had quite a flair for the dramatic this season. If foes cannot pitch around 1B Anthony Rizzo and star rookie 3B Kris Bryant, each of whom delivered many big hits this season, they could be courting trouble.

Why are we talking about the wild card Pirates and Cubs and not the NL West winner Los Angeles Dodgers (3/1)? Perhaps because the Blue have faltered in recent postseasons, especially ace Clayton Kershaw, surprisingly ineffective in past playoff action. Critics have suggested that Kershaw has "stopped pitching" and merely tried to blow away opposing batters in recent postseason failures; let's see if Kershaw has taken heed. Staff co-ace Zack Greinke might have the better shot at the NL Cy Young with an ERA that spent much of the season in circa 1968 Bob Gibson territory, but the Vin Scullys spent the entire season looking for upgrades at the back of the rotation and are hoping ex-Brave and deadline addition Alex Wood can help after another addition, Mat Latos, recently flopped. Still, the Dodgers have home-field edge in the NLDS vs. the New York Mets (17/5), the league's surprise entry that capitalized upon the collapse of the East and the dysfunctions of the division-favorite Nats. Deadline additions Jose Uribe and especially Yoenis Cespedes added a very sharp edge to the Mets' attack, though it will be up to a young rotation (Matt Harvey, Noah Syndergaard, Jacob de Grom, and perhaps rookie Steven Matz) to carry the Mets deep into the postseason.

We have used space talking about the other contenders because we cannot add to the many praises of the St. Louis Cardinals (2/1), who steamed to the best record in the bigs. Other than their postseason-nemesis Giants, who aren't in the playoffs this October, no team has fared as well in the playoffs lately as the Cardinals, who can still manufacture runs effectively and own proven October forces in Matt Holliday, Yadier Molina, and Matt Carpenter. Importantly, St. Louis has had the Dodgers' number the past two years in the playoffs, as the Cardinals' pitching depth and ability to hit in the clutch have proven the difference.

While we think the Pirates and the Cubs are dangerous X-factors, and both capable of beating the Dodgers or Mets in the NLCS, we doubt any of those can top the Cards. An eventual rematch of the epic 1985 "I-70" World Series vs. the Royals might be in the Redbirds' future. If so, thirty years on, perhaps St. Louis can finally erase the memories of Don Denkinger, Jorge Orta, and Dane Iorg and gain long-awaited revenge. Stay tuned.